Night At The Museum Wiki
Register
Don't have an account?
Sign In
Advertisement
in: Character stubs, Characters, Exhibits,
and 6 more

This character article is a stub. You can help Night at the Museum Wiki by expanding it.
Sir Lancelot

Lancelot in the film 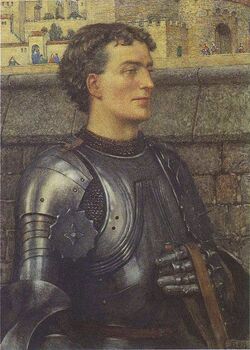 Portrait of Sir Lancelot
Known for
One of the Knights of the Round Table
Home
British Museum, London UK
Occupation
Knight
Portrayed by
Dan Stevens

Sir Lancelot is the (formerly) main antagonist in Night at the Museum: Secret of the Tomb He is portrayed by Dan Stevens

In the Legend of King Arthur, Sir Lancelot was one of King Arthur's Knights of the Round Table and was considered to be one of his greatest knights. In legend, he also fell in love with Guinevere.

His first appearance as a main character is in Chrétien de Troyes' Le Chevalier de la Charette, or "Lancelot, the Knight of the Cart", written in the 12th century. In the 13th century, he was the main focus in the lengthy Vulgate Cycle, where his exploits are recounted in the section known as the Prose Lancelot. Lancelot's life and adventures have been featured in several medieval romances, often with conflicting back-stories and chains of events.

Sir Lancelot is an exhibit in the British Museum. When Larry, Nick, and the exhibits are attacked by a Triceratops skeleton, he counterattacks and saves them. When Jedediah and Octavius get lost in the ventilation shaft, Lancelot insists upon helping Larry and the others find them. It soon becomes clear that Lancelot believes he is a real person, not a wax statue, and that he must find the Holy Grail for King Arthur. He helps the others defeat an attacking Hydra statue and is left with Nick while everyone else goes to find Ahkmenrah's parents. After Ahkmenrah's parents tell them that the tablet needs moonlight to retain its magic, Lancelot steals the tablet, believing it to be the Holy Grail. He was chased by everyone throughout the museum, but they do not catch him, and he runs through London trying to find Arthur. He comes to a theater showing a production of "Camelot", and attempts to give "Arthur" (Hugh Jackman) the tablet. Jackman and "Guinevere" (Alice Eve) try to tell him that they are not the real rulers of Camelot, but he does not believe them. He steals a lighted torch and runs up to the roof. Larry, Nick, and the exhibits (without Laaa) soon catch up with him. Larry tries to make Lancelot give him the tablet, but Lancelot refuses. As a result, the exhibits begin to lose their lives. Before they all die, Lancelot realizes his mistake and surrenders the tablet, restoring life to the exhibits. He is also seen at the end of the movie, dancing near the Moai head.