Night At The Museum Wiki
Register
Don't have an account?
Sign In
Advertisement
in: Character stubs, Characters, Egyptian,
and 5 more

This character article is a stub. You can help Night at the Museum Wiki by expanding it.
Shepseheret 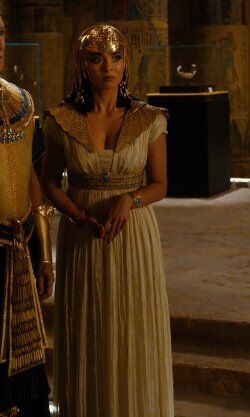 Shepseheret is an Ancient Egyptian Queen who is Merenkahre's wife and Ahkmenrah and Kahmunrah's mother. However, her older son, Kahmunrah from Night at the Museum 2 is never mentioned in this film. She is a supporting character in Night at the Museum: Secret of the Tomb . and she is only seen in the third movie.

A​fter the gang from NYC reaches the British Museum and makes their way to the Egyptian Wing, Ahkmenrah has a coming home sensation. Two brilliant sarcophagi are seen with the lids tossed aside. Shepseheret emerges and calls to her son. She is the queen of Egypt, but it still very kind and sweet. She adores her son, Ahkmenrah, and seems like she would do anything for him.

"When I first saw you, you instantly became more precious to me than all the ancient wonders." Merenkahre

What is happening to you, my son?
Community content is available under CC-BY-SA unless otherwise noted.
Advertisement