Night At The Museum Wiki
Register
Don't have an account?
Sign In
Advertisement
in: Characters, Exhibits, Dinosaurs,
and 7 more

Rexy in Night at the Museum: Battle of the Smithsonian 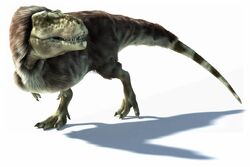 Rexy first appears when Larry visits the Museum of Natural History while looking for a job. He’s the first exhibit as you enter the Museum, a large reconstructed T-rex.

When the sun goes down, Rexy’s the first exhibit to come to life. On Larry's first time as a night guard, Rexy was seen "drinking" from the step-activated water fountain. Rexy chases Larry around the museum in an attempt to get him throw him a bone (one of his ribs). Rexy and Trixie are both known for their dog-like behavior and joy to play fetch.

The Manual stated that the bone must be thrown twice. The second time mentions to not throw the bone in the direction of the fossil exhibit.

Battle of the Smithsonian

Rexy’s briefly seen at the start of the film Night at the Museum: Battle of the Smithsonian and he’s known for his tug-of-war between him and Larry.