Night At The Museum Wiki
Register
Don't have an account?
Sign In
Advertisement
in: Actors, Female, Night at the Museum: Secret of the Tomb 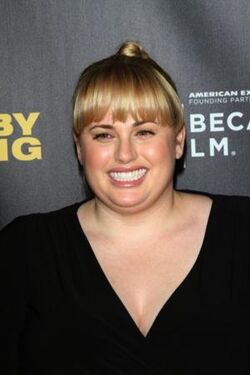 Rebel Wilson is an Australian actress, writer, entrepreneur, and stand-up comedian. She is set to portray Tilly in the upcoming film, Night at the Museum: Secret of the Tomb.

She began appearing as Toula in the SBS comedy series Pizza from 2003 and sketch comedy series The Wedge. In 2008, Wilson wrote, produced and starred in the musical comedy series Bogan Pride. The following year, she won the Tropfest Best Actress award for her role in Bargain and made a guest appearance in City Homicide. Shortly after moving to the United States, Wilson was cast as Brynn in the feature film Bridesmaids.

She also appeared in A Few Best Men, What to Expect When You're Expecting and Struck by Lightning, leading Variety to name her one of their "Top Ten Comics to Watch for 2011". Wilson also appeared as Becky in Bachelorette and starred in musical-comedy Pitch Perfect, where her role as Fat Amy earned her several award nominations. Wilson created and starred in Super Fun Night, a television comedy that began airing on the ABC network on 2 October 2013 and was cancelled on 9 May 2014 after only one season.