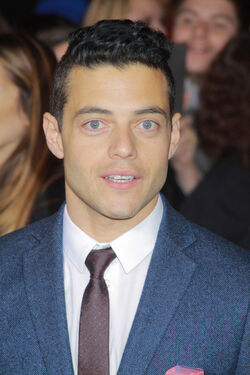 Rami Malek is an American actor. He portrays Ahkmenrah in the Night at the Museum (Series).

In 2004, Malek began his acting career with guest-starring roles on several notable television series including Gilmore Girls, Over There, and Medium, as well as voicing "additional characters" for the video game Halo 2 (for which he was uncredited). In 2005, he was cast as the prominent recurring role of "Kenny", the gay teenage next-door-neighbor on the FOX comedy series The War at Home.

In 2006, Malek made his feature film debut as Pharaoh Ahkmenrah in the comedy Night at the Museum and reprised his role in the 2009 sequel Night at the Museum: Battle of the Smithsonian. In the spring of 2007 he appeared onstage as "Jamie" in the Vitality Productions theatrical presentation of Keith Bunin's The Credeaux Canvas at the Elephant Theatre in Los Angeles.

In 2010 Malek returned to television in a recurring role as the Egyptian American suicide bomber Marcos Al-Zacar on the 8th season of the Fox series 24.[6] Later that same year, he received critical acclaim for his portrayal of Corporal Merriell "Snafu" Shelton on the Emmy Award-winning HBO World War II mini-series The Pacific.

During filming of The Pacific, Malek met executive producer Tom Hanks, who was impressed with his performance and would later cast him as college student Steve Dibiasi in the feature film Larry Crowne, released in July 2011. In August 2010 it was announced that Malek had been cast as the Egyptian vampire, "Benjamin", in the final installment of the popular Twilight franchise, The Twilight Saga: Breaking Dawn.

Retrieved from "https://natm.fandom.com/wiki/Rami_Malek?oldid=8517"
Community content is available under CC-BY-SA unless otherwise noted.