Night At The Museum Wiki
Register
Don't have an account?
Sign In
Advertisement
in: Films, Movies, Night at the Museum:Battle of the Smithsonian, Smithsonian exhibits

View source
Battle of the Smithsonian 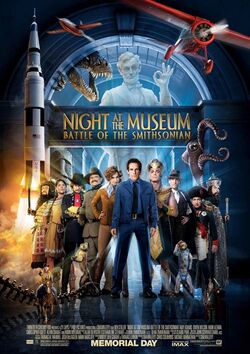 When the lights go out, the Battle is on
Directed By
Shawn Levy
Written By

Two years after the events of the previous film, Larry Daley is now CEO of Daley Devices, a direct response television company that sells inventions inspired by his experiences as a night security guard at the American Museum of Natural History. While wealthy and successful, he has not had the time to see his museum exhibit friends in several months.

One day when Larry returns to the museum, he finds out that it is closed for renovations and upgrades. He asks his former boss Dr. McPhee about it; McPhee tells him that because not many people have come to the museum in a long time he has been asked by his advisers to replace 90% of the museum exhibits which are moving to the Federal Archives at the Smithsonian Institution in Washington DC; and fill the museum with new but holographic exhibits that automatically answer questions on historical subjects. Later that night Larry goes into the museum to visit his friends one last time and he is told that while Theodore Roosevelt, Rexy the Tyrannosaurus skeleton, the Easter Island Head, and Akhmenrah will remain at the museum, Jedediah, Octavius, Dexter the Capuchin Monkey, and others will no longer come to life since the Golden Tablet of Akhmenrah that animated the exhibits each night will also remain.

After the exhibits leave, Larry receives a call from Jedediah. Dexter stole Akhmenrah's tablet and brought it to the Federal Archives, and the evil Pharaoh Kahmunrah, Akhmenrah's older brother, is attacking Jedediah and the other exhibits. Larry travels to Washington and visits the National Air and Space Museum, the National Gallery of Art, and the Smithsonian Institution Building, searching for the Federal Archives with the help of his son Nicholas Daley. Larry locates the exhibits, frozen in their shipping container in the middle of a battle with Kahmunrah and his troops. As Larry obtains the tablet the sun sets and the exhibits, and others at the Smithsonian, come alive. Kahmunrah tells Larry that bringing exhibits to life is just one of the tablet's powers, and that he intends to use it to conquer the world by raising an army from the underworld.

Larry escapes from the Egyptian troops with the help of General George Armstrong Custer while releasing the other artifacts in storage including a gigantic octopus. He meets the beautiful and adventurous Amelia Earhart, who is attracted to Larry and accompanies him through the National Gallery. While moving through the paintings, Larry and Amelia end up in V–J day in Times Square with a sailor named Joey Motorola. In the ensuing fracas, Larry loses his cellphone. Larry and Amelia trap Kahmunrah's soldiers in the photograph, but Napoleon Bonaparte captures them. Napoleon takes Larry to Kahmunrah who has also allied with historical leaders Ivan the Terrible and Al Capone and has rejected fellow villains Darth Vader and Oscar the Grouch. Jedediah is captured trying to rescue Larry.

Kahmunrah attempts to open the Gate of the Underworld by pressing the symbols on the tablet, which resembles numbers on a keypad, but the combination has changed. Kahmunrah forces Larry to obtain the new combination before sunrise by trapping Jedediah in a filling hourglass. Larry and Amelia flee from Russian troops and visit the statue of Abraham Lincoln at the Lincoln Memorial. At the National Air and Space Museum, they consult a group of Albert Einstein bobbleheads who tell them that the new combination is the value of pi. When they are found by Napoleon, Ivan, and Capone, Larry and Amelia escape in the Wright Flyer and return to the Smithsonian Institution Building. The two separate, with Amelia searching for help while Larry delays Kahmunrah.

Napoleon, Ivan, and Capone obtain the combination from one of the bobbleheads. Kahmunrah opens the Gate of the Underworld and summons an army of Horus warriors. The Lincoln statue suddenly arrives, forcing the warriors to retreat to the underworld, and Amelia frees the New York exhibits from their container and recruits other Smithsonian exhibits. As the exhibits battle, Octavius frees Jedediah from the hourglass by hitting his helmet against the glass and Larry takes the tablet. Napoleon Bonaparte, Al Capone and Ivan the Terrible stop Larry, but he distracts them by asking them who is the boss, which Bonaparte and Capone fight over, enabling Larry to escape, but is stopped by Kahmunrah, who tries to kill Larry. Larry overpowers Kahmunrah and banishes him to the underworld. While the gigantic octopus goes into the waters near the Washington Monument until the sun starts to come up, Amelia flies Larry and the New York exhibits back to the Natural History Museum. Knowing that she will turn to dust at sunrise if she does not return to the Smithsonian, Amelia kisses Larry and leaves.

Larry sells his company and donates money to the museum to restore the exhibits. Roosevelt and Akhmenrah as tour guides, Attila as a storyteller, and other exhibits come to life in public as "animatronics" at the museum, which now stays open after sunset. Larry is rehired as the night guard, and meets a young woman named Tess who looks like Amelia. She asks for help going through the museum because she is "always getting lost."

Writers Robert Ben Garant and Thomas Lennon confirmed to Dark Horizons that they were writing a sequel to Night at the Museum, originally with the tentative title Another Night at the Museum. The writers said that "there'll be existing characters and plenty of new ones."

The film was mostly filmed in Vancouver with some scenes filmed in the Smithsonian in Washington, D.C.. A scene was shot at the Lincoln Memorial on the night of May 21, 2008. Scenes were also shot at the American Museum of Natural History in New York on the August 18 and 20, 2008.

The trailer was released with Bedtime Stories, Yes Man and Marley & Me in December 2008. The trailer accompanied the film Bride Wars in January, The Pink Panther 2 in February, and Dragonball Evolution in April 2009. The film was also promoted as an opening skit on American Idol, where a replica of the Idol judge seats are being held at the real Smithsonian Institution.

An alternate ending included on the DVD and Blu-ray releases featured the return of Dick Van Dyke as Cecil Fredericks, Bill Cobbs as Reginald, and Mickey Rooney as Gus. Night at the Museum label on the Wright Flyer exhibit in the National Air and Space Museum. Filmmakers loaned the Smithsonian Institution props used in the movie which were displayed in the Smithsonian Castle including the pile of artifacts featured in the film. The Smithsonian also made a brochure available online and at museum visitor service desks outlining where to find artifacts.

As of 2009, numerous artifacts which inspired the movie were on display at Smithsonian Museums along the National Mall. Many of the artifacts are labeled with "Night at the Museum" logos.