Night At The Museum Wiki
Register
Don't have an account?
Sign In
Advertisement
in: Characters, Exhibits, Villains,
and 5 more

Napoleon in the film 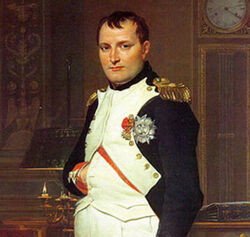 Napoleon Bonaparte is a supporting antagonist in Night at the Museum: Battle of the Smithsonian. He was one of the right hand men of Kahmunrah, as a support for his project of conquest of the World. He is a short man wearing a big hat and a lot of medals on his uniform, complexed with his height and speaking with a French accent. He, along with Ivan, came from the basement of the Smithsonian Museum.

Night at the Museum 2: Battle of the Smithsonian

Napoleon Bonaparte and his fellow hussars came from the basement of the Smithsonian Museum. He, Capone and Ivan join forces with Kahmunrah and were ordered to capture Larry and the golden tablet. In return, he would get a share of the world. He does not really see where the point is. Napoleon likes to be with his fellow hussars and give them French commands. He, Ivan and Capone are Kahmunrah's right hand men. It is unknown what happened to the three of them and their henchmen after the battle. Whether he and his hussars returned to their places in the museum's basement is uncertain.

Napoleon Bonaparte was the ruler, or rather "Emperor" of France after the French Revolution. He is known for being short and rotund although it is confirmed to be just a myth. He had a sister named Pauline who he greatly admired and was said to have possibly have a relationship with. His first wife was named Josefina who was later exiled. His second wife was from Austria. Notice it was the same as King Louis XVI and Marie-Antointheette. Napoleon enrolled at military school at 16. He was transferred to and eventually graduated from the L'Ecole Militaire, France's most prestigious military academy, starting out as a artillery officer. He seized power in France after its revolution from a coup d'état, eventually becoming emperor. During his reign, Napoleon made a number of reforms in the nation, some notable examples being the Bank of France, offering public education, and the Napoleonic Code. He also launched the Napoleonic Wars and successfully saved France from many European monarchist coalitions which were trying to destroy the legacy of the Revolution. He made of France the leading nation of Europe, dominating most of the continental territory, in which he diffused the ideas of the Revolution. Under Napoleon, France controlled places like Spain, the Italian Peninsula, Poland, and Germany. However, his empire collapsed after some costly mistakes, those being the Continental System, Peninsular War, and ultimately a failed invasion of Russia, which wiped out much of his army. He was exiled to the island of Elba off the coast of Italy, while the true king got into power. Though later Napoleon managed to get an army together and overthrow the king. He became ruler once more and held power for one hundred days. When the other European powers discovered his return, they immediately declared war to take down Napoleon. When he tried to recover his empire, Napoleon was finally defeated at the Battle of Waterloo by the combined British and Prussian Forces lead by the Duke of Wellington and Gebhard Von Blucher. He was exiled to an island in the Atlantic Ocean where he stayed until his death.

With Ivan, Capone and their henchmen (gangsters, Streltsys, and hussars), Napoleon joined Kahmunrah. They don’t really see where the point is, but they understand they will be given a part of the world in exchange of their help.

Napoleon captures Larry Daley in the National Gallery of Art and brings him to Kahmunrah. He later sees him through a telescope with Amelia Earhart crossing the park. Kahmunrah, thinking they are trying to flee, sends his forces against them. They find Larry and Amelia in the Air & Space Museum, but they fail in the pursuit.

Napoleon is next seen along with Capone, Ivan and their men returning to Kahmunrah with a bobble-headed Albert Einstein as a hostage prisoner having confessed the Tablet combination being (Pi). After a giant statue of Abraham Lincoln defeats Kahmunrah's army of falcon-headed warriors unleashed from the underworld through a gate opened by the Tablet, Kahmunrah orders Napoleon, Ivan, Al, and their men to attack Larry and his friends (those imprisoned and rescued by Amelia and those from the Smithsonian). When Larry tries to insert the Tablet back to "divide the house", Napoleon and the two other leaders confront him but Larry uses his clever wits to get them to fight amongst themselves about who is the boss who deserves the Tablet more.