Night At The Museum Wiki
Register
Don't have an account?
Sign In
Advertisement
in: Characters, Exhibits, Night at the Museum,
and 8 more

View source
watch 01:36
We're Getting Mutants in the MCU - The Loop
Do you like this video?
Play Sound
Moose 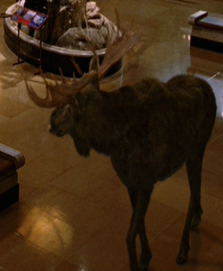 After Ahkmenrah used the magic of the Egyptian Tablet to get all the exhibits back to the museum before sunrise, Larry Daley sees the Moose trying to get through the revolving door (which proved impossible due to its antlers) as he instructs it to lead the Caribou to the loading dock.

Night at the Museum: Secrets of the Tomb

The mounted head of a different moose can be seen among the mounted animal heads watching the others wandering the halls of the British Museum before they ran into the Triceratops.