Night At The Museum Wiki
Register
Don't have an account?
Sign In
Advertisement
in: Characters, Exhibits, Egyptian,
and 3 more 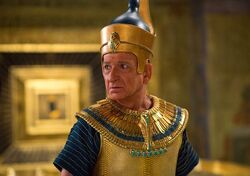 Merenkahre is an Ancient Egyptian Pharaoh who is Shepseheret's husband, and Kahmunrah and Ahkmenrah's father. He is also the museum tablet's creator. This character is onily seen in Night at the Museum 3 and was portrayed by Ben Kingsley.

Larry had to bring Ahkmenrah, the Tablet, and his group to the British Museum of Natural History where the mummies of Merenkahre and Shepseheret are held in order to find a way to keep the Tablet from corroding.

It is explained by Merenkahre that, after Ahkmenrah's birth, he commissioned his high priest to create and tablet, imbuing it with the moon god, Khonsu's, magic and power to keep the royal family together, even after death.

Although a stiff, imposing, somewhat terse man, Merenkahre truly does love his younger son, Ahkmenrah, and his wife. When the tablet has a flare up and Ahkmenrah takes ill again, he is extremely worried and vehemently charges Larry to help the tablet and help his son.