“All right! Let's do this, people! And... animals! And... weird faceless puppet creatures!”
―Larry Daley

Larry started off as a man who had trouble finding work, his inventing career did not take off for a while so he decided to work at the Museum of Natural History as a night guard. When he found out that everything came to life he wanted to quit. But then he realized that he needed to protect the Tablet of Ahkmenrah or everything in the museum would turn to dust. Later, the tablet got stolen by Cecil and two other night guards so Larry and the other members of the museum set out to retrieve it. They ended up getting the tablet and restoring it to it's rightful spot in the museum.

Two years later Larry started Daley Devices he invented the Glow-in-the-Dark Flashlight, the Super Big Dog Bone and the Unloseable Keyring. He visited the museum and found out that some exhibits were being moved to the federal archives and Dexter was one of those exhibits who took the tablet. Larry traveled to the Smithsonian and defeated the evil pharaoh, Kahmunrah. 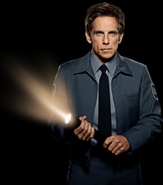 Night At The Museum Scene Larry Meets Rebecca And Dr. Mcphee
Add a photo to this gallery

Retrieved from "https://natm.fandom.com/wiki/Larry_Daley?oldid=8782"
Community content is available under CC-BY-SA unless otherwise noted.