Night At The Museum Wiki
Register
Don't have an account?
Sign In
Advertisement
in: Characters, Exhibits, Males,
and 7 more

View source
watch 01:36
We're Getting Mutants in the MCU - The Loop
Do you like this video?
Play Sound
Kahmunrah 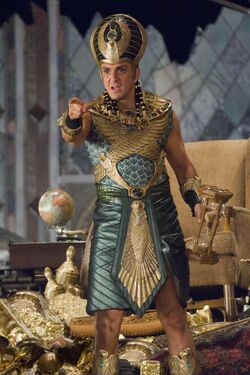 “I HAVE COME BACK TO LIFE!”
―Kahmunrah stating that he has returned to life, used about 3 times before cutting off during the 3rd time.

Kahmunrah is the main antagonist of Night at the Museum 2. He is portrayed by Hank Azaria.

Kahmunrah is the older brother of Ahkmenrah. He wishes to get his younger brother's magical tablet so that he can open the door to Duat (the Egyptian underworld). He is envious and resents Ahkmenrah due to the fact he was denied the throne despite being the elder of the two.

Night at the Museum 2: Battle of the Smithsonian

He rules the Earth and the Smithsonian museum with an iron fist, and then joins forces with other historical leaders such as Napoleon Bonaparte, Ivan the Terrible and Al Capone. Later, modern screen villains, which include Oscar the Grouch (from Sesame Street) and Darth Vader (from the Star Wars films), also want to be on Kahmunrah's team, but Kahmunrah does not let them claiming Oscar the Grouch is "not evil at all" and doesn't believe Darth Vader has anything to add to his side because he does not speak in this film and does not understand his attempt to use the Force (which naturally does not work as he is wax).

Kahmunrah discovers the combination on the tablet has been changed, and coerces Larry into finding out the new combination by trapping his cowboy friend Jedediah in an hourglass. He later learns the combination after Al interrogates a bobble-headed Einstein and reveals to Kahmunrah that the combination is pi and uses it to open to the gate to Duat, unleashing an army of falcon-headed warriors. These are sent back to the underworld by the Abraham Lincoln Statue. Kahmunrah is later banished to Duat by Larry and he is never seen or heard from again.

He will come back in this movie for revenge.