Night At The Museum Wiki
Register
Don't have an account?
Sign In
Advertisement
in: Characters, Exhibits, Night at the Museum: Secret of the Tomb,
and 6 more

View source
watch 01:36
We're Getting Mutants in the MCU - The Loop
Do you like this video?
Play Sound
Jedediah 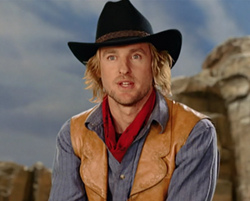 “Now you know my shame. Jedediah's impotent rage. His guns don't fire. Take me away.”
―Jedediah to Larry Daley

Jedediah, or Jed, is a true at heart cowboy. He is cheerful, clumsy, and helpful. He likes riding horses, expanding and protecting his territory, and blowing stuff up, even if he is only a few inches tall and made of plastic. He's sarcastic and likes to think he's bigger than he really is, mentally and physically. But he's brave and strong, always there to help or be annoying while he sits in your shirt pocket. He becomes close friends with Octavius, the Roman general whose glass case sits next to his own. At first, they do not get along and are unwilling to cooperate due to their apparent differences, and even end up fighting. But seeing as they have no choice they do end up working together and find they have a lot of common ground; they're both great leaders who want what's best for their people. They become fast friends and are not often seen apart. The two, who come to care very much for one another, make a great team and risk their lives more than once for the good of the museum.

Jedediah is a cowboy in The Hall of Miniatures. He and his men capture Larry after he is hit by miniature darts fired by the miniature figurines from the Mayan diorama. After the Politician there spoke of their dioramas getting locked up at night, Jedediah tries to split his head with a train, but fails as the train is only a miniature. He tries to shoot Larry in the eye, but to his embarrassment, his guns don't work. He fights with Octavius in the beginning of the film. After Larry is rescued by Theodore Roosevelt, Jedediah states that he won't protect him forever.

During Larry's second night working as a security guard, Larry grabs Jedediah and Octavius in order to keep their dioramas from feuding. Larry tells them that they better behave or else they will end up like their "friends" from the Mayan Diorama, which Larry previously locked up. This doesn't work when Dexter steals Larry's keys again and releases the Mayans, resulting in all three dioramas ending up in a feud.

When it comes to reclaiming the Egyptian Tablet from Cecil Fredericks, Gus, and Reginald, Jedediah and Octavius end up becoming friends.

He is thought to be dead when the car he and Octavius are driving gets thrown into a snow bank thus exploding, but is shown to be alive later on.

Night At The Museum: Battle of the Smithsonian

Along with many of the other exhibits, he is shipped to the Smithsonian Archives to be put in storage. He somehow manages to learn how to use the phone and calls Larry, begging for help when Kahmunrah and his guards start attacking the exhibits in the Smithsonian, trying to get the Tablet. He is then trapped in an hourglass by Kahmunrah when he tries to help Larry, and Kahmunrah uses his release as part of a bargain with Larry.

However, Octavius, his close friend, frees him during the Battle of the Smithsonian, and the two fight Kahmunrah's armies. When they find out that they won the battle, they hug each other. Jedediah becomes embarrassed, and pulls away. At the very end of the film, he is seen piloting a miniature plane with Octavius as a passenger.

Jed is one of the exhibits who are featured in an evening event being hosted at the American Museum of Natural History by Larry. When the tablet starts to corrode, Jed goes out of control alongside the other museum exhibits.

After traveling to London, Jed and Octavius fall into a ventilation shaft at the British Museum. Before they willingly accept their fate, Octavius asks him to hold his hand. He is confused, and after they are saved, Octavius refuses to acknowledge he said anything. Jedediah knows otherwise. Dexter is sent by Larry to go and rescue the two miniature figures. He and Octavius see Dexter's shadow and jump down a grate in fear. Jed and Octavius land in a Pompeii exhibit just as the model Mount Vesuvius erupts, leading the two to become trapped within the exhibit. They are saved by Dexter.

At the end of the film, Jed returns home to the Museum of Natural History, accepting that he will stay as a plastic miniature after dawn breaks. He, however, wakes up when the tablet arrives back at the museum. He is last seen dancing on the records with Octavius.