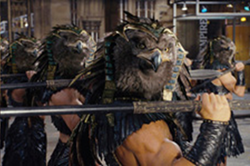 Horus warriors in the film.

Horus is the Egyptian God of vengeance, sky and kingship. He was most often depicted as a falcon, most likely a lanner or peregrine, or as a man with a falcon head.

The earliest recorded form of Horus is the patron deity of Nekhen in Upper Egypt, who is the first known national god, specifically related to the king who in time came to be regarded as a manifestation of Horus in life and Osiris in death. The most commonly encountered family relationship describes Horus as the son of Isis and Osiris but in another tradition Hathor is regarded as his mother and sometimes as his wife. Horus served many functions in the Egyptian pantheon, most notably being a god of the sun, war and protection.

Horus appears in Night at the Museum: Battle of the Smithsonian when Kahmunrah releases them from the underworld. It is not mentioned that the falcon headed men are actually Horus. The group of them appear from the underworld carrying spears ready to attack and join Kahmunrah's fight to take over the world. The Abraham Lincoln Statue breaks through the window in the Smithsonian Castle scaring off the group of Horus', they all retreat back into the underworld where they know it is safe.

Night at the Museum: Battle of the Smithsonian: The Video Game

Various Horus soldiers appear in the final level. After Larry gets advised be Benjamin Franklin, two Horus warriors try to stop him by shooting fireballs. They are seen outside the Lincoln Memorial. To defeat these warriors, Larry has to shine on them or trick them by letting their fireballs hit each other. They also appear during the final battle with Kahmunrah.

Retrieved from "https://natm.fandom.com/wiki/Horus?oldid=9113"
Community content is available under CC-BY-SA unless otherwise noted.