Night At The Museum Wiki
Register
Don't have an account?
Sign In
Advertisement
in: Characters, Main antagonists, Night at the Museum: Secret of the Tomb,
and 6 more 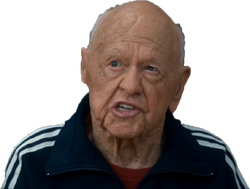 Gus is a major antagonist in Night at the Museum, and was seen briefly in the third movie. He is the boss and partner in-crime of Reginald and one of Cecil Fredericks's two assistants.

Night At The Museum

Gus is a main character in the first film. He is first seen with Cecil and Reginald when Larry gets the job as a night guard. He is later seen when Larry tells them that they didn't say that the exhibits came the life at night (this was because they thought Larry wouldn't believe them). He is shown at the end of the film to be very strong for an old man, as he punched Larry very hard in the face. He is also grumpy, mean and rude. He also seems to be the most comedic of the three former night guards since he constantly calls Larry silly nicknames throughout the film like hot dog, lunchbox, and cupcake.

Cecil, Gus, and Reginald didn't return in Night at the Museum: Battle of the Smithsonian. However they did appear in the alternate ending included on the DVD and Blu-ray releases.

Night At The Museum: Secret of the Tomb

Gus has a minor role in the third film, as he, Cecil, and Reginald are now in a retirement home.