Night At The Museum Wiki
Register
Don't have an account?
Sign In
Advertisement
in: Characters, Exhibits, Characters with an unknown fate,
and 9 more 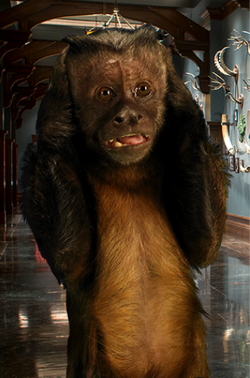 Dexter first appears in the film Night at the Museum. A Capuchin Monkey on display in the Hall of African Mammals who at first seems cute and cuddly but is actually quite cheeky. When Larry Daley has his first Night Guard shift, Dexter causes a lot of trouble for him. Davester tears up the list which Larry was using to help him, bites his nose, urinates on Larry, and even steals his keys to unlock the storage gate releasing the exhibits into Central Park.

Dexter also appears in Night at the Museum: Battle of the Smithsonian. In the film, he plays a much smaller role. In the beginning, Larry finds out the tablet was actually stolen by Davester and now Ahkmenrah's evil brother Kahmunrah came to life and imprisoned the New York exhibits in the storage bin. The movie also has a funny gag when the monkey jams the crate lid on Larry's fingers. But Able the Space Monkey has a larger role in the film. Able teams up with Dexter and in one scene they both slap Larry back and forth, until he hits them back. Unlike the mischievous Dexter, Able is a respectful monkey who helps Larry defeat Kahmunrah.

Dexter appears in Night at the Museum: Secret of the Tomb. He goes with the others to the British Museum. He saves Jedediah and Octavius by urinating on them to stop a lava flow after the Pompeii model volcano erupted. Eventually, Dexter along with Jedediah and Octavius join the group. However, because of Sir Lancelot stealing the tablet and running off for the Camelot theatre (believing it to be the Camelot from his legend), eventually after confronting him on the theatre rooftop, all of the exhibits begin dying out and turning back into normal exhibits, including Dexter, who was slowly losing his energy. Dexter ultimately dies while Larry is at his side, trying to get him to slap him. However, Larry is able to get the tablet from Lancelot after the latter realized his mistake, which then, Larry puts it in the moonlight, saving the exhibits, including Dexter.

After the group returns to New York, the exhibits prepare themselves for their final sunrise due to Ahkmenrah staying with his parents at the British Museum with the tablet. Larry and Dexter spend their final moments together, where Larry offers one last slap but instead, Dexter gives him a kiss on the lips. Afterwards, Dexter returns to an ordinary exhibit after sunrise.

Three years later, Dexter is brought back to life when Tilly from the British Museum brings Ahkmenrah back with his tablet.