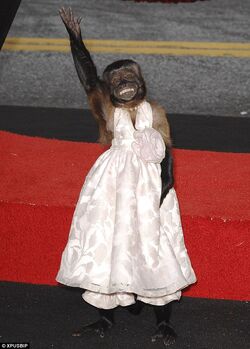 Crystal is an animal actor and female capuchin monkey known for her main onscreen role as Dexter in the Night at the Museum films, she also portrayed Able the Space Monkey in the sequel Night at the Museum: Battle of the Smithsonian.

Crystal was acquired and trained by Birds & Animals Unlimited, Hollywood's largest supplier of animals. Her acting career began as a baby monkey in the 1997 film George of the Jungle. More recently, she portrayed the irritating monkey Dexter in the Night at the Museum franchise, and a drug dealing monkey in The Hangover Part II. In 2012, she played Dr. Rizzo on the sitcom Animal Practice.

Crystal lives with her trainer, Tom Gunderson, in Los Angeles County, California. Other animals live in the home, "including dogs, horses, a cat, and another female capuchin, named Squirt". Crystal, who sleeps no less than eight hours every day, shares a mattress with Gunderson, his wife, fellow capuchin Squirt, and a chihuahua.