Night At The Museum Wiki
Register
Don't have an account?
Sign In
Advertisement
in: Characters, Humans, Night Guards,
and 6 more 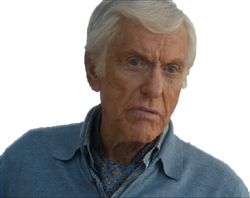 “Larry remember, don't let anything in... or out.”
―Cecil Fredericks

Cecil J. Fredericks is the main antagonist in Night at the Museum,one of the three former night guards that used to work at the Museum of Natural History. He is the leader, boss and colleauge of Gus and his henchman Reginald.

We first see Cecil in Night at the Museum, he is an elderly night security guard about to retire from the American Museum of Natural History. He hires Larry despite his unpromising résumé. Because of recent financial troubles, the museum plans to replace Cecil and his two colleagues Gus and Reginald with one guard. They advise Larry to leave some of the lights on and warn him not to let anything "in...or out".

Once night comes, Larry discovers that the exhibits come to life, which Cecil did not tell him since Larry won't believe him at first. Cecil gave Larry an advice to study history to prepare himself better. The next night, Larry uses what he has learned to better control the exhibits. However, things go awry, and one of the Neanderthals went outside when sunset came and has turned into dust. Dr. McPhee almost fires Larry in the morning after what happened to the Neanderthal exhibit, but gives him one more night.

Larry brings Nick to the museum to show him the exhibits, but none is alive. They investigate and catch Cecil, Gus, and Reginald in the act of stealing the tablet and other valuable objects. Like the exhibits, the guards receive enhanced vitality from the artifact; wishing to retain their health and fund their retirements, the three plan to frame Larry for the thefts, and disabled the tablet to stop the exhibits from interfering. Nick reactivates the tablet, but Cecil locks him and his father in the Egyptian room and flees with the tablet.

Larry releases the Akhmenrah's mummy from his sarcophagus. The pharaoh speaks English from many years as an exhibit at Cambridge, and helps Larry and Nick escape. The three find the other exhibits fighting all over the lobby, and Larry convinces them to work together. Although some of the exhibits capture Gus and Reginald without difficulty, Cecil escapes by stagecoach with Larry, Nick, Akmenrah, Jedediah, Octavius, Rexy and Attila the Hun in pursuit in Central Park, where they stop him and regain the tablet. During the credits, it was shown that Cecil, Gus, and Reginald are now working as museum janitors to evade being sent to jail.

Cecil, Gus, and Reginald didn't return in Night at the Museum: Battle of the Smithsonian. However they did appear in the alternate ending included on the DVD and Blu-ray releases.

He is originally going to appear as a major antagonist, when he gets revenge on Larry for defeating him.

Cecil returns along with Gus and Reginald in Night at the Museum: Secret of the Tomb. Larry visits them at the retirement home to ask them about why the Tablet of Ahkmenrah is corroding. Cecil reveals to Larry that he and his father were part of the expedition to find Ahkmenrah's tomb, and that a local warned them about tomb.