Night At The Museum Wiki
Register
Don't have an account?
Sign In
Advertisement
in: Characters, Exhibits, Male,
and 4 more 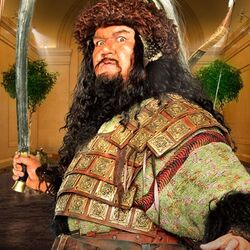 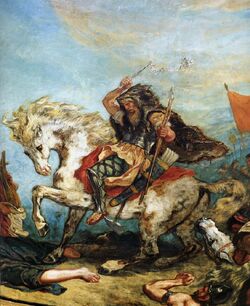 During his infanthood, his father Mundzuk always ignored him while he was pillaging, ripping love from him.

Until he grew up he became leader of the Huns and started to pillage and trying to take over countries and ripping people apart. However, he believed in magic and sorcery.

When it came to his wedding night, Attila suffered from a nosebleed and choked to death from a stupor.

Life at the Museum

Attila is first seen running around a corner and sees Larry and begins chasing him. The latter runs into an elevator where Attila fails to capture him. Later, when Larry is reading about the Huns, Attila (possibly) is seen with other men pulling the limbs off a frightened captive, implying that was their way of execution. Later, Larry tries to befriend him by doing magic tricks, which Attila likes at first. However, Attila orders his men to get Larry. This time, Larry is caught and is carried back to Attila. A frightened Larry knows he is at the mercy of the nocturnal crazies, but Larry believes it is his doom when Attila orders his men to hold him in the air and pry off his limbs with their bare hands. Luckily, before Attila gets the chance to keep Larry and his limbs forever, Larry is saved by Teddy, though Larry gets a feeling he hasn't seen the last of Attila.

Later, Larry and his son Nick free an Egyptian pharaoh named Ahkmenrah, Attila sees the three and appears to collide with them. At first, Larry starts experimenting with gibberish to try to make sense of what Attila is saying. When Ahkmenrah intervenes, Larry understands Attila's intentions and reminds Attila of his tragic past when he was abandoned as a child. As Larry does so, Attila sobs and Larry hugs him, singing a Hun lullaby to calm him down. The Huns agree to join Larry, Nick and Ahkmenrah in the battle against the thieves and take Cecil Fredericks, Gus, and Reginald captive.

In the sequel, due to being a minor character, he has lots of screen time.

In the third film, he has a larger role, teaming up with Larry and the other exhibits to find out what was wrong with the tablet.

Attila and his friends on the poster
Community content is available under CC-BY-SA unless otherwise noted.
Advertisement