Night At The Museum Wiki
Register
Don't have an account?
Sign In
Advertisement
in: Characters, Character stubs, Characters with an unknown fate,
and 6 more

Amelia Earhart in the film 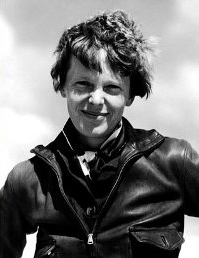 This character article is a stub. You can help Night at the Museum Wiki by expanding it.

She was the first woman pilot to fly over the Atlantic ocean.

Night at the Museum: Battle of the Smithsonia

Amelia comes across Larry Daley, who is searching for his Museum of Natural History friends in the Smithsonian Institution. Amelia instantly becomes attracted to Larry and accompanies him through the National Gallery in order to get away from Kahmunrah's Egyptian troops.

While moving through the paintings, Larry and Amelia end up in V-J day in Times Square with a sailor named Joey Motorola. Amelia and Larry trap Kahmunrah's soldiers in the photograph and help the giant octopus by dumping water from a nearby painting over it, but Napoleon Bonaparte captures them.

Once commanded to help find the code for the Tablet of Ahkmenrah, Amelia and Larry come across a bust of Theodore Roosevelt proving to be no help. Amelia tells Larry that she knows someone who could help and takes him to The Thinker, but he too gets distracted and gives no help at all. Amelia sparks a memory in Larry's mind taking them to the Air and Space Museum where the Albert Einstein bobbleheads are on display.

As the pair leave, they are trapped by the Russian troops, Napoleon Bonaparte, Ivan the Terrible and Al Capone. Larry and Amelia escape in the Wright Flyer while the exhibit Tuskegee Airmen hold them off, and they return to the Smithsonian Institution Building. The two separate with Amelia searching for help while Larry delays Kahmunrah.

Amelia frees the New York exhibits from their container and recruits other Smithsonian exhibits. During the battle, Amelia opens the underworld gate.

Amelia flies Larry and the New York exhibits back to the Natural History Museum before flying back to Washington, knowing that she will turn to dust at sunrise if she does not return to the Smithsonian.