The Abraham Lincoln Statue in Night AT The Museum:Battle Of The Smithsonian 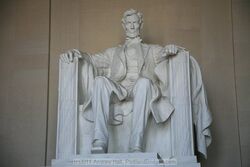 History of the statue

The Abraham Lincoln Statue was sculpted by Daniel Chester French and carved by the Piccirilli Brothers. It is situated in the Lincoln Memorial in Washington D.C.. The statue is 22 feet tall, and made out of marble.

Abraham Lincoln was the 16th President through the Smithsonian Ititution's winow to stop the Horus Soldiers summoned by Kahmunrah.

Retrieved from "https://natm.fandom.com/wiki/Abraham_Lincoln_Statue?oldid=9351"
Community content is available under CC-BY-SA unless otherwise noted.